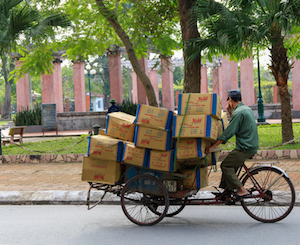 China’s central bank has provided RMB500 billion of liquidity to the nation’s biggest five banks for RMB100 billion each, via its 3-month Standing Lending Facility (SLF).

The amount is roughly equivalent to one 50 basis point rate cut in the commercial banks’ required reserve ratio (RRR).

Has the People’s Bank of China finally blinked in the face of deteriorating economic conditions?

In a research report, UBS AG says that the Chinese government’s resolve for reform continues to be tested by the continued slide in economic growth and business sentiment.

It is also possible that the PBoC may also be pre-empting the usual surge in liquidity demand towards quarter-end and in advance of the "golden week" holiday. This is especially needed since recent forex inflow increases have been poor despite July and August’s record trade surpluses.

But the move will make an across-board RRR cut highly unlikely this year, as the PBoC remains reluctant to commit to longer term liquidity easing. It also means a rate cut is probably not imminent, though UBS still expects one is likely by year-end.

UBS’ China economist Wang Tao writes in the report that the use of the SLF — instead of a more high profile and transparent tool such as an across-board RRR cut or a rate cut — reflect the PBoC’s desire to support growth without being seen to be conducting "strong stimulus" or general easing.

In contrast to the earlier PSL (Pledged supplementary lending) liquidity provided to the China Development Bank, liquidity this time is being provided to China’s five big commercial banks, which are less constrained by loan/deposit ratios, making it easier for them to increase credit supply across the board.

However, the impact of such a move on boosting corporate investment and supporting real economic growth will be relatively limited, says Wang Tao, as the property downturn continues to worsen, excess capacity accumulates and business outlook remains weak.

With 70% of credit in China still being priced off benchmark lending rates, a rate cut is the most direct way of lowering financing costs in the economy, argues the report.

This will likely be preceded or accompanied by a mortgage rate cut, which should support home buyers and help stabilize property market transactions.