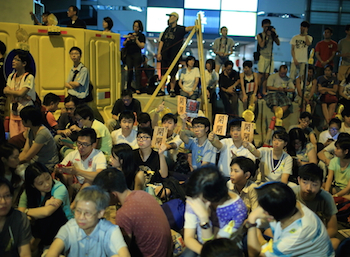 Over the weekend, Benny Tai, the founder of Occupy Central (OC) and a law professor at University of Hong Kong, and other members of the campaign announced to commence the campaign, an political movement demanding for "civic nomination" when universal suffrage is allowed in the Chief Executive election 2017.

A few weeks ago, China’s National People’s Congress decided that election candidates will be nominated by a committee of 1,200 people.

The organizer originally planned to launch the event on Oct 1, China’s National Day. The announcement was triggered by the earlier-than-expected protest by a few thousands students who broke into Civic Square, a small round about in front of the entrance of Hong Kong Central Government Building (CGB) in Admiralty, a 30-minute walk from core financial district in Central.

Yesterday, the police used tear gas when attempting to clean up the zone, but eventually attracted more protestors to join the event.

Although the OC organizers already called for dismissing on Sunday, a few thousand people are still gathering in CGB. In addition, shopping areas like Causeway Bay in Hong Kong Island and Mongkok in Kowloon also see hundreds of people gathering. The chance of spreading out has risen.

As the protests break out during the week of China’s Golden Week and now spread to shopping areas frequently visited by tourists, Hong Kong’s retail sales will suffer if the protest continues to drag on.

Hong Kong’s retail sales have contracted since February 2014, mainly due to the changing spending behaviors of Chinese tourists from high-end to mass products. While it is premature for us to forecast the impact as the National holidays have not started, the golden week sales will likely contract this year.

The banking sector and the stock exchange continue to operate normally. Staff can go to work via subway (MTR) which also runs smoothly today. However, the OC campaign will likely intensify further over the next few days as Hong Kong will have two public holidays on Wednesday and Thursday.

More supporters of OC will likely join the campaign later this week. Ground transportation will continue to be affected over the next few days. We will monitor the situation closely.

The Hong Kong Linked Exchange Rate System (LERS) has survived through major crises since 1983. We do not see the protest will shake the Currency Board regime of which the Hong Kong dollar is fully backed by the U.S. dollar.

In fact, the Hong Kong dollar has been traded close to the strongest side of the Convertibility Undertaking (7.7500) since the end of June, underpinned by the strong capital inflows triggered by Shanghai-Hong Kong Stock Connect.

Even with the rise of the offshore RMB market, we do not see the HKMA has intended to change the system in the near term. In addition, since the Global Financial Crisis, the Hong Kong dollar had traded on the weak side of the band (7.800-7.850) for a very limited period in Jun 2010 and Aug 2011 when the Europe debt crisis intensified. We expect the LERS will function normally.

The risk of this political debate is on the legislative proceeding of annual Government Budget approval in the future, as members of the pan-democratic camp at Legislative Council may use filibusters more frequently.

Delaying infrastructure development will dampen the city’s economic competitiveness. Headlines like "HK will be taken over by Shanghai" or "China will no longer use Hong Kong as a test bed for reform" will appear more frequently.

As China’s onshore market is increasingly liberalized, Hong Kong will start to lose its unique advantage as a gateway to China market. There is a need for the city to speed up and strengthen its economic and market infrastructure promptly.