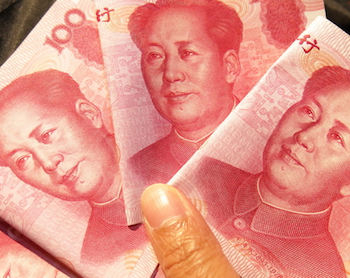 China’s new loans’ recovery back to a normal level probably reflects the ongoing targeted easing by the People’s Bank of China (PBoC).

But the aggregate financing still remains lukewarm, at RMB1.05 trillion in September, compared with RMB1.4 trillion last September. This suggested that the de-leveraging of shadow banking activity continues.

The share of the off-balance-sheet financing dropped to about 18% of aggregate financing in the first three quarters of this year, reaching the lowest level of since the fourth quarter 2012.

China’s M2 growth edged up to 12.9% year-on-year in September, versus 12.8% in the previous month. The pickup in M2 growth reflected that recent monetary policy easing measures, such as RMB500 billion liquidity injection to major commercial banks through Standing Lending Facility (SLF), have taken effect, says the report.

China’s total foreign reserves unexpectedly declined to US$3.89 trillion at the end of the third quarter, from US$3.99 trillion in the second quarter, against market consensus of US$4 trillion.