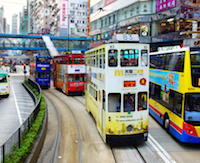 The expected launch of the Shanghai-Hong Kong Stock Connect program next Monday may potentially mark a temporary peak of the markets for both Mainland’s A share and Hong Kong’s H share markets, says a BofA Merrill Lynch Global Research report.

The current market expectations on potential flows are too high, especially for northbound traffic. In addition, yield curve has flattened significantly in recent months.

If historical trading pattern holds, the markets may head lower reasonably soon after the launch.

To position for a potential short-term correction, investors may want to cut holdings in construction, brokerages and airlines in both A and H shares, and banks in A shares.

These sectors had enjoyed big rallies recently and are technically overbought, says the report.

Despite the long-term implications of the stock connect program, its near-term impact is probably over-played, says BofA Merrill. Allowing investors to buy may not translate into significant orders immediately.

In addition, the valuation gap between A and H shares has narrowed, and there are growth concerns about China’s economy. The fact that onshore investors who wanted to buy H shares would most likely have already been in Hong Kong via unofficial channels is another reason that expectations might be too high.

The current market expectations on the initial flows are high. On Nov 11, the day after the launch date was announced, A share market turnover reached a record high of US$71 billion.

It’s interesting to note that, since the bear market started in 2008, most short-term surges in volume had coincided with a temporary market peak, says the banks.

On the other hand, a flattened yield curve is no friend of the stock market. Since the January peaks, yield of 10-year China government bond (CGB) has declined by over 100 basis points.

Yield spread, as measured by 10-year CGB yield minus 1-year CGB yield, has narrowed significantly since April, and had reached a level seen only during previous market-panic periods.

Essentially, the bond market is predicting a recession again. In the past, the spread had led the equity market by about six months, suggesting that the equity market may face strong headwinds reasonably soon, predicts BofA Merrill.

The bank says it may underestimate investors’ desire to use the stock connect program both ways, and underestimate the Chinese government’s desire to hold up the A share market.

What Is China’s Real Intention Behind The RRR Cut?