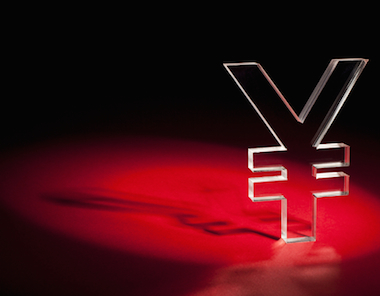 In recent months, the tightening of regulations and monitoring of shadow banking and banks’ off-balance sheet are causing shadow banking credit in China to shrink, and pushing new credit creation more towards new bank loans and bonds, says a research report issued by UBS AG.

China’s Credit Composition Is Shifting Away From Shadow Banking 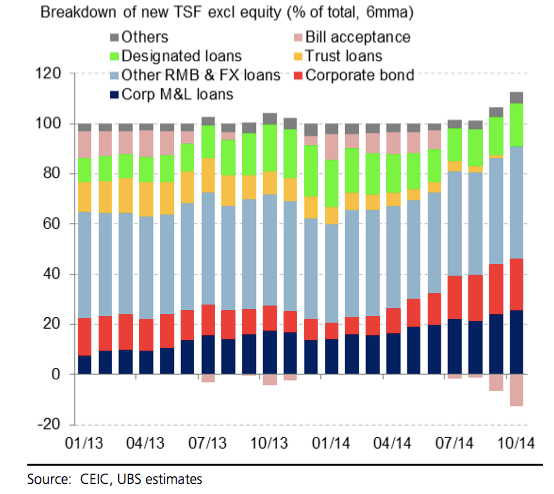 But importantly, China’s regulatory tightening is likely also encouraging more rapid growth in alternative new forms of shadow credit, such as security companies’ asset management businesses, which are not captured by TSF data.

According to the China Security Association, assets under management in this category jumped by over 30% in the first half of 2014, from RMB5.2 trillion at the end of 2013 to RMB6.8 trillion by mid-2014.

The sharp growth in this type of asset management business has reportedly been driven in part by the taking-over of problematic trust products’ underlying assets.

In the end, although new TSF are still important for any assessment of China credit developments, it is no longer as sufficient an indicator of overall credit growth as before. Equal attention must also be paid to each month’s new credit composition, and any other financing activities that fall outside the official data radar.

This trend will likely continue, says the report, as China’s shadow banking regulations are still evolving and new local government bond swaps are set to take off.

Local government debt stock that is currently held as bank loans will likely be swapped with new local government bonds next year. This will likely further depress new TSF readings, and at the headline level misleadingly suggest a credit crunch in China.

With growth set to ease further in the next two years and the property slowdown to persist, UBS expects overall credit growth to stay sluggish.

The People’s Bank of China will remain focused on increasing liquidity support to support growth and counter the impact of rising capital outflows, but this will do little to lower real lending rates in the economy or to boost business confidence.

As such, UBS still believes the most effective and direct solution would be a benchmark lending rate cut. The bank is forecasting three 25 basis points interest rate cut, with the first most likely to be triggered by poorer economic data in early 2015.