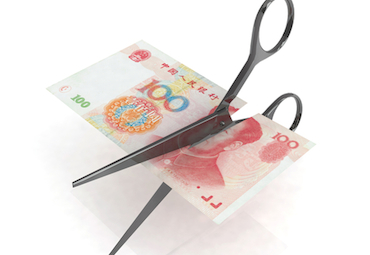 At the same time, the PBoC took other measures on interest rate liberalization, reducing the types of different lending and deposit rate benchmarks available.

The central bank has been adopting various targeted easing measures during the past year to replenish interbank liquidity and lower money market rate and bond yields. But these measures have had little impact on banks’ lending rates, which are still largely priced off benchmark rates.

A benchmark lending rate cut is the most direct and effective way to lower corporate borrowing costs.

The rate cut will help loosen the tightness of financial conditions but does not necessarily imply a reversal of the PBoC’s monetary and credit policy stance, says the UBS report.

The main effect of today’s rate cut will be to reduce the debt servicing burden and improve corporate cash flow and balance sheets, which should help to slow the pace of non-performing loan formation and reduce overall financial risk.

It will have limited impact on corporate credit demand, which has been depressed by excess capacity and weak domestic demand, while credit supply has been controlled more by quantitative and prudential tools, which are only relaxed at the margin. Therefore, China’s credit growth will continue to be slow in the coming year.