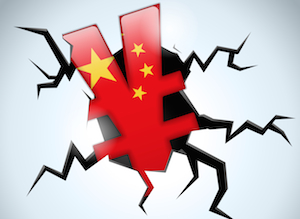 Perhaps to foster private competition in banking, the Chinese government has so far largely allowed the P2P lending business to grow unchecked. By 2014, the size of the industry had reached RMB100 billion (US$16 billion), up from RMB27 billion the year before.

In general, P2P platforms charge what are considered exorbitant rates and have weak credit control. Some of them run pools which have strong elements of a Ponzi scheme, warns the report.

If and when many of them ultimately fail, the collateral damage can be meaningful. It has become one of the nodes linking various players in the shadow banking sector including banks, insurers, guarantors and industrial enterprises.

The People’s Bank of China (PBoC) and the country’s securities regulator are reportedly working on rules to regulate the industry better. But the horse may have already bolted by now.

Like wealth management products sold by banks and other financial institutions, P2P products are generally structured as investment legally, but sold and priced like debt or even deposit to consumers.

As a result, it’s often unclear who bears the ultimate default risk. Most lenders via P2P platforms count on explicit or implicit guarantees, real or perceived, by the platforms, their shareholders and other involved parties.

Many P2Ps platforms charge borrowers 24% to 36% per annum, but only pass on 8% to 15% to lenders. This wide spread makes the business very attractive to promoters, giving rise to a high abscond rate.

At the minimum, the high margin does not provide strong incentivizes for operators to check risks carefully. It’s difficult to imagine, in the current tough business environment, many going concerns can afford such high rates. So it’s a matter of time when the industry will endure large scale default.

If the industry runs into difficulties, the damage would not be isolated in the P2P sector. Many P2P platforms are serving as a funding channel for other shadow banks, including high risk lenders like small lenders, guarantors and pawn houses.

Many P2Ps’ shareholders may also have to foot a significant portion of the ultimate losses due to the implicit guarantee. These shareholders include listed banks, insurers, brokers, Internet companies and some industrial companies, says the report.

It is important to note that China’s overall shadow banking growth rate has weakened noticeably. Within the total social financing aggregate figure, growth rate of shadow banking credit dropped sharply from 15.5% in January to 12.8% in March. There are also signs of weakness in sales of wealth management products, trust, and corporate bond in the first quarter.