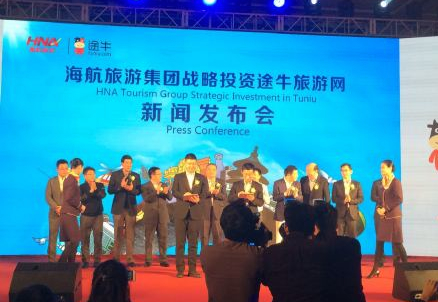 Haikou, Hainan province-headquarter HNA Group, which holds assets in the tourism, aviation, investment and logistics, is making the investment as a strategic investor.

The two companies will cooperate on travel services including air tickets booking, tour services and others.

Four of the top five Chinese online agencies, Ctrip, Qunar, Elong, and Tuniu, which held a combined 68% share of the market by revenue in the first half of 2015, posted wider operating losses despite a 78.3% increase in aggregate revenue, says the report.

In October, Baidu Inc., shareholders of both Ctrip and Qunar, engineered a major share swap deal valued at US$3.4 billion to create an alliance between the two long-term rivals.

In May 2015, Tuniu raised US$500 million investment from a group of investors led by e-commerce company JD.com Inc.

(Update on January 22, 2016: The two companies announced that the deal had been completed.)