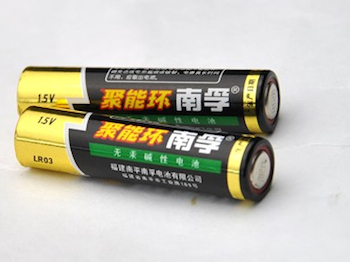 Chinese battery maker Fujian Nanping Nanfu Battery Co., controlled by Chinese private equity and venture capital firm CDH Investments, is near completion of a reverse merger to become listed on China’s New Third Board, according to disclosure documents (in Chinese).

In the transaction that values China’s largest alkaline battery company at RMB4.4 billion (US$668 million), an entity controlled by CDH Investments will become the controlling shareholder of Ningbo Yajin Technology, with CDH Investments owning a 99.81% stake.

According to the disclosure document, two entities controlled by CDH Investments partners, Wu Shangzhi and Jiao Shuge, controls 84% of Nanfu Battery as of the end of 2015.

In Ningbo Yajin Technology’s latest disclosure filing yesterday, it says the transaction has been examined by the stock exchange, and it is in the process of applying to regulators to allow trading of its shares, which has been suspended since last June.

In October 2014, CDH Investments agreed to acquire around 79% of Nanfu Battery from Procter & Gamble for an undisclosed amount in the investment firm’s second ownership of the battery maker.