This has sparked a debate over whether China will have adequate foreign exchange reserves to cover its future import needs and foreign liabilities.

One method is to simply say, if China’s foreign exchange reserves continue to fall at the average monthly rate of the past 19 months, they would be exhausted by October 2022.

If they fall at the average monthly rate of the past three months, they would be exhausted by October 2018. 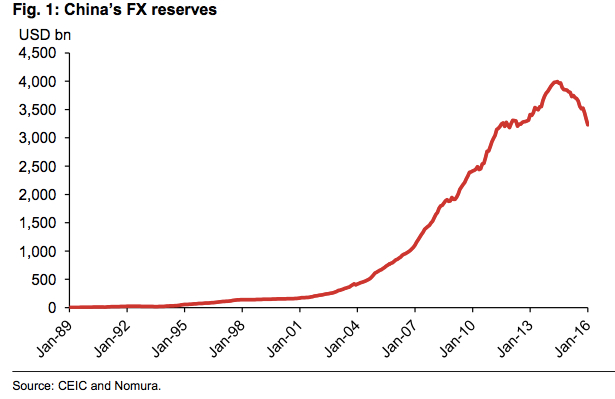 Or more alarmingly in one hypothetical scenario: China would run out of foreign exchange reserves if 5% of its population were to utilize the annual quota of US$50,000 per individual for foreign currency conversion.

Any forecasts depend heavily on the underlying assumptions, which produce a wide range of outcomes, says a research report by Nomura.

Depending on different assumptions the bank made to calculate estimates, by 2018 China’s foreign exchange reserves could rise as much as US$3.544 trillion or fall as much as US$4.021 trillion.

Specifically, if China’s foreign assets/GDP ratio stays stable and if foreign investors withdraw half of their stock of non-FDI China investments and if the current account surplus/GDP remains around 2.7%, China’s foreign exchange reserves would only fall by a further US$356 billion by 2018. 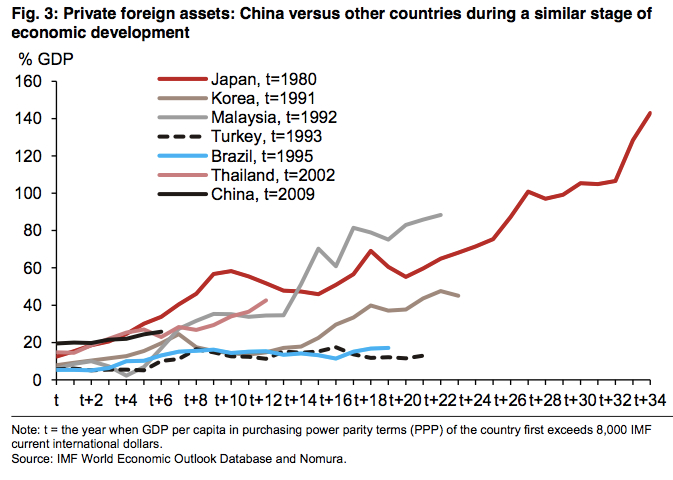 If China’s private foreign assets rise by US$2.1 trillion in the next three years, its current account surplus/GDP stays at 2.7% and its foreign liabilities fall by US$1.2 trillion, then China’s foreign exchange reserves could fall below US$1 trillion by 2018.

In a much more extreme case, if China’s private foreign assets track those of Japan in 1986 to 1989, and even if its foreign liabilities remain unchanged, it would take only a small decline in the current account surplus for China’s US$3.231 trillion of foreign exchange reserves to be exhausted by 2018.

This way, Chinese residents and companies can find and achieve attractive domestic investment returns at homoe, therefore keeping their diversification into overseas assets at a more manageable level.