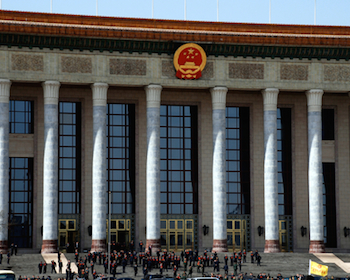 Investors need to sign out of social media and block the key word "Five-Year Plan" and "National People’s Congress" from their inbox for a week during China’s annual meetings of its political and business leaders, says Andrew Gilholm, managing Director at consulting firm Control Risk.

Here are the four things investors absolutely need not to focus on in the news deluge emerging now from the meeting, says Gilholm.

1. China has released its plan for economic policy and reform to 2020

This is roughly what will be reported as the National People’s Congress closes next week. What will be released is a outline, mostly very high-level in nature, and largely comprising themes and goals which have been familiar for several months if not years.

There may be portentous departures in official rhetoric or protocol, or unexpected commitments in the Five-Year Plan, but most key questions on policy under Xi Jinping are about implementation.

The plan will tell us little about that. Most investors had better look beyond the plans to more detailed plans that will follow over the coming year for major sectors and regions, and on specific reform areas like state-owned enterprises. Watch local and industry level roll-out, not national level rhetoric.

The "Made in China 2025″ strategy and the latest healthcare reform plans are among those documents already out. Some micro developments widely missed amid the Five-Year Plan hype include changes in February to environmental protection enforcement, and anti-bribery and competition rules.

For many companies on the ground, these are part of regulatory trends with more tangible implications than the looming restatements of macro policy themes.

People really need to stop obsessing about China’s headline GDP growth. This is not because the official figures are bogus. It’s just that, for most businesses and investment strategies, this number is simply not a very useful indicator of what is happening in China’s economy. In simplistic terms, there are two Chinese economies (or rather, many) and two very different stories unfolding.

Go to a steel town in the industrial north or drive through miles of empty apartments in a second-tier city and you see China is in recession. This is the "old economy" fueled by construction and state-heavy investment.

Look at the performance of a private service-sector company in Jiangsu or tour an research & development park in Shanghai, and you see China is still enjoying double-digit growth. This is the "new economy" Beijing hopes will take off as the old one lands, hopefully softly.

This divergence partly explains polarized bulls versus bears debates on whether China is doing fine or covering up a crisis. But whether you’re bullish or bearish in the year of the monkey depends on what you do, not on the national growth rate.

Those investing in Chinese firms set to benefit from strong policy support in priority new economy industries can find plenty of growth and opportunity, as can multinational companies who supply or – more cautiously – partner with such companies.

The picture is much gloomier of course for heavy industry players facing overcapacity and restructuring, or for commodity producers.

Perhaps the most significant thing about the GDP growth target is its very existence. Continuing to proclaim a target growth rate suggests its deeply engrained political status as a touchstone for stability and confidence.

The 6.5% rate will be hard to maintain, and such self-imposed pressure both reflects and reinforces a troubling reality: in the constant trade-offs between short-term growth stability and restructuring for long-term sustainability, the former usually wins. Without more evidence that the latter is also taking place, this implies a worrying long-term trajectory.

The rhetoric from the congress and the Five-Year Plan will doubtless be encouraging on this front, but the rhetoric was encouraging in 2013. Expect lots of talk about the centrality of the market, reforming state-owned enterprises, empowering the private sector, deregulation and innovation.

Plenty of positive, tangible steps are occurring, and the topic of supply side structural reform has emerged as a hot topic in official media in recent months (decoded, it suggests a revival of intent to tackle thorny problems such as industrial overcapacity and local government debt). Still, in most key areas walk is definitely lagging talk – again, it’s implementation.

4. Xi is tightening his grip on power and striving to overcome resistance to reform

This is an increasingly common interpretation of Chinese politics and policy, likely to feature in some media coverage. People should be very cautious about the assumptions thrown around regarding both Xi’s role and his intent.

On taking office three years ago he was widely seen as relatively weak and lacking any real policy agenda. By 2014 he was being declared the strongest leader since Mao, and often cast as a bold reformer.

He may turn out to be both, but these easy labels mask huge uncertainty about how leadership and decision-making now work in the world’s second-largest economy.

China has not suddenly become a one-man state under Emperor Xi. Both the extent of his power and what he intends to do with it are very unclear, and are likely to remain so until after the 2017 Party Congress.

He has certainly accumulated unusual authority, but there is scant evidence of decisive top-down leadership overcoming vested interest to drive tough reforms. Rather, there is actually increased confusion about economic policy and authority, as seen in the fumbling and reversals on stock market and fiscal reform.

Here the congress rune-reading could be justified: traditionally Premier Li Keqiang and other State Council officials do most of the talking on economic policy; look out for Xi’s own profile.