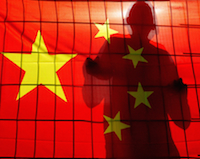 A sharp property downturn, the return of producer price deflation, a financial crisis, a trade war with the U.S. and unexpected foreign exchange moves are some likely black swan events that could rock the Chinese economy in the year of the Rooster, says a report by ANZ AG.

Black swans are not monsters, but they can pose significant threats to the economy. Following are listed the black swan risks that ANZ says deserve investors attention globally for the rest of 2017.

The rally in China’s property market over the second half of 2016 saw prices in tier 1 and tier 2 cities rocketing as high as 50% amid flush domestic liquidity in a low yield environment. Real estate prices in Beijing, Shanghai, Guangzhou and Shenzhen are usually out of reach for many working class residents. 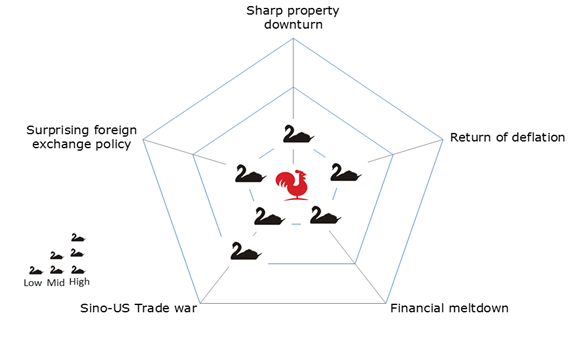 As a result, many cities were prompted to implement tightening measures, notably during the "Golden Week" holiday in October, which included banning the purchase of a second home and increasing the down payment requirement. At China’s Central Economic Work Conference in December, policymakers reiterated their stance to combat the property bubble with the statement, "houses are for living, not for speculation."

In fact, the challenge of striking a balance between bubble control and economic growth is also faced by policymakers worldwide, as the property sector plays a key role in economic growth. China is thus not an exception. If property tightening is overdone, a sharp property downturn could be the biggest risk to growth in 2017.

The property market will slow down only gradually in 2017 as a result of the cooling measures implemented since last September, says the report. But ANZ does not think the market will enter a downward cycle. The property market will continue to de-stock in the next one or two years, although the cooling measures might delay the process. The inventory level measured in terms of turnover cycle is forecast to take two years, or reach end-2018, for China’s property inventory to drop to similar levels seen in 2012, the year China’s inventory level hit the lowest in the past five years (with significant implications to the commodity market).

The Return Of Producer Price Deflation

ANZ believes that China’s PPI will continue to rise on an annual basis during the first half of 2017 on the back of elevated commodity prices. Statistically, metal and coal prices account for 37% and 11% of the change in the PPI. At present, both seem to hold up and there is a low likelihood of a sharp decline.

China’s commodity prices are often event driven and are sensitive to the government’s regulatory actions, making the monthly change in the PPI a very volatile process. ANZ expects to see a 5% increase in PPI in 2017 on average compared with a decline of 1.4% of last year. The headline rate will soften in the fourth quarter when the base effect kicks in. However, if a sharp fall in commodity prices due to unexpected shocks from domestic policy or global event may drag PPI back to the negative zone.

Debt growth continues to be a concern to policymakers. Even with a nominal GDP growth of 8.0% in 2016, China’s debt-to-GDP ratio is estimated to have risen to 223%, up by another 14 percentage points last year. The pace of credit growth is alarming. Despite the government’s explicit call for deleveraging last year, credit continues to expand faster than GDP expansion.

By December, new loans drawn by real estate developers rose 58% and that by households (mostly mortgages) surged 86% to a total of RMB19.14 trillion, or 25.7% of 2016’s GDP. The fast growing property-related lending would inject a concentration risk of banks’ loan exposures and hence pose a hidden risk to China’s financial stability.

Another source of financial risk comes from the growth of shadow banking activities. The total fund balance of wealth management products reached RMB26 trillion by June 2016. Besides the size, ANZ is also concerned about the growing inter-connectedness between banks and non-bank financial institutions through the selling of wealth management products that are off banks’ balance sheets and are exposed to increasing credit risks.

The reality is that the shadow banking sector, which is relatively less regulated, has been accumulating leverage and risks. Since banks play a pivotal role in shadow banking activities, they cannot be immune from any negative spillovers. In addition, the bond market will also be sensitive to these activities as bonds comprise a considerable share, 56% during the second quarter of 2016, of shadow banking sector assets.

Since April 2016, Chinese financial regulators have issued several measures to tighten shadow banking activities. Notably, the central bank included banks’ loans to non-bank financial institutions and wealth management products into the Macro-Prudential Assessment (MPA). Such actions had spilled over to the bond market and caused some volatility during the last quarter. But ANZ says that a financial crisis isn’t its baseline scenario in 2017.

A Trade War Against The U.S.

The risks of a Sino-U.S. trade war are clearly heightened after U.S. President Donald Trump took office. He reiterated his "America First" policy and anti-globalization stance at his inauguration.

ANZ says a trade war will ultimately hurt the U.S.’s business interests. Imposing tariffs on Chinese goods may actually be an indirect tax on many U.S. corporates, though Trump may still want to use it to please his grassroots supporters.

In addition, there are hawkish members even within the U.S. community who favor Trump’s hard-line stance towards China, such as the U.S. semiconductor industry which had issued a report claiming unfair competition from China.

Meanwhile, China is also gearing up to tackle Trump’s policy. President Xi Jinping made a long speech in Davos last week to defend free trade and globalization. Earlier, Fan Gang, a People’s Bank of China adviser, also said that China has prepared for the worst in light of Trump’s presidency. The most probable response from the Chinese government in a scenario of heightened trade tension will be to ban U.S. imports and restrict the U.S.’s access to the Chinese market, says ANZ.

What happened on August 11, 2015 was clearly not competitive devaluation. The authorities had intended to align the daily fixing with the spot rate. Otherwise, why would the People’s Bank of China exhaust its foreign reserves to defend the value of the yuan? As the Chinese authorities have launched many measures to tighten capital outflows, the intention is to curb speculative flows and discourage market expectations of long-term depreciation.

That said, the Yuan has joined the International Monetary Fund’s (IMF) Special Drawing Rights basket from 1 October 2016. The Chinese government has also reiterated its willingness to adopt a managed floating exchange rate regime.

ANZ believes that the ideal scenario in the eyes of Chinese policymakers is to allow the currency to move in accordance with the direction of global markets. Notably, if the U.S. dollar strengthens against other currencies, China is willing to follow. The current policy is to maintain stability on a trade weighted basis and smooth out the impact of short-term volatility, says the report.