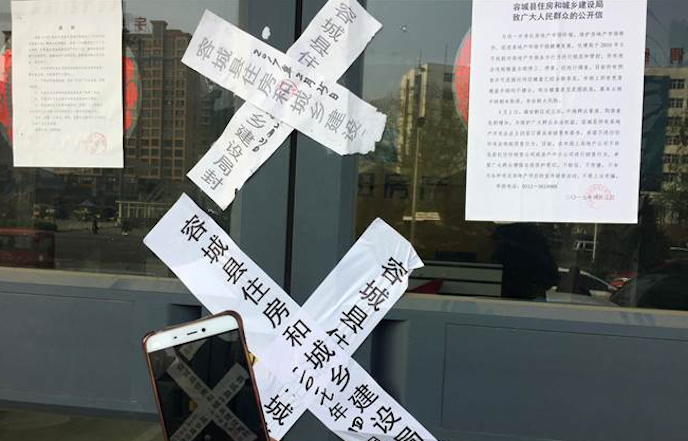 At 6:03pm on April Fools’ Day, China’s state news agency Xinhua quietly published a terse statement on behalf of the country’s Communist Party leadership and the State Council: The country is to establish a XiongAn New Area in Hebei province as part of a 1,000-year national strategic priority.

The 1,353-word announcement set off a gold rush as investors flooded the sleepy counties about 100 kilometers southwest of downtown Beijing to buy property, the safest and best asset to bet on the rise of a planned Chinese economic miracle.

But for those well-connected few, this is merely old news. As property prices skyrocketed in a matter of hours, these individuals with strong "Guanxi", or connections, are leisurely sipping tea with big grins on their faces. Four months ago, a group of investors from Beijing emerged out-of-blue in XiongAn and purchased 110 apartment units at once.

"We all thought they were crazy. Now we know they were the ones who knew what was coming from the inside," a local property agent told Chinese media.

At that time, apartment units in XiongAn county cost less than RMB4,000 (US$580) per square meter. Down payments were only 20%. After the official Xinhua announcement, prices jumped from RMB20,000 to RMB30,000 for fully certified commercial property units. Since buyers swamped in from across the country, nothing outside of an all-cash offer would be considered by sellers.

Within a day, the situation got so out of control that local authorities suspended all property transactions in the XiongAn New Area. They cut-off the less privy investors and their hopes to benefit from the once-in-a-thousand-years investment opportunity.

In financial writer Wu Xiaobo’s books chronicling China’s economic development over the past 1,000 years, he found a recurring cycle between a strong central government with a tight grip on commerce and the eventual break-down when regional commerce became too powerful to challenge central control.

During the past few decades, Beijing has been carefully managing economic development across the country to avoid uneven pace of advances that have historically triggered dynasty changes.

The establishment of XiongAn New Area can be viewed as part of such effort, as it has been hailed as another nationally important zone after Shanghai’s Pudong district and Hong Kong’s neighboring city of Shenzhen, which has transformed itself into the country’s center of innovation from a fishing village little more that 30 years ago. XiongAn is located in northern China, while both Shanghai and Shenzhen are in the south.

What’s ironic is that despite smartphones and self-driving cars, the essence of how government and commerce interact in China has remained largely unchanged. Those with close ties to the government, especially senior officials in the central government, have benefited the most from the country’s great economic leap forward. Next are the regional tycoons and the wealthy who command immense financial resources. The last are those without Guanxi or money, those who are banned from buying apartment units after rushing to XiongAn.

The tiered socio-economical reality is in full display in the speculative frenzy in XiongAn this past week. The insiders bought properties months before. Many private enterprise owners including mining and factory bosses were cutting deals with local realtors under the table, despite the official ban. Smaller individual investors moved to neighboring areas, buying apartments in counties next to the New Area and betting prices will also appreciate, albeit at a less rapid pace.

But one day ago, governments tightened control over property speculation in neighboring counties as well. The window to make a profit for small investors without Guanxi lasted only four days.

"We have missed too many opportunities and cannot miss it this time," Mr. He, an employee at a state-owned enterprise in the Northeast, said as he drove all night with his seven-year-old son to XiongAn on April 1. Thousands like Mr. He went to XiongAn, but most are likely to return empty-handed. They are simply too late.