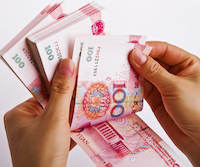 Policies to contain capital outflows and ongoing concerns over currency depreciation are likely to hold back internationalization in the short-term. Nevertheless, a gradual increase in holdings by reserve managers could still support China’s rating profile over time.

Countries whose currencies have a significant role in global official foreign-exchange reserve portfolios are less likely to experience external funding stress, reflecting stable demand for assets denominated in their currency.

Fitch’s "reserve currency flexibility" indicator incorporates this into its sovereign ratings. The indicator is based on the proportion an individual currency represents in global reserve holdings, as reported in the IMF’s Currency Composition of Official Foreign Exchange Reserves (COFER) survey.

The March 2017 COFER survey officially included the RMB for the first time. It identified US$84.5 billion of RMB-denominated official foreign-currency assets held by reserve managers at end-2016, equivalent to 1.1% of total reported reserves holdings. This was more than the Swiss franc, but well below other currencies included in the data. 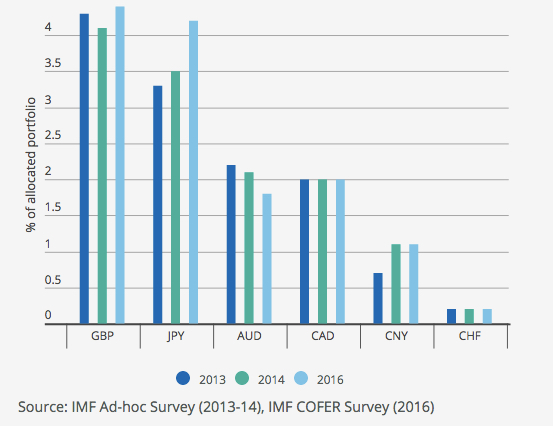 The survey suggests that the share of RMB-denominated assets in central bank reserve portfolios fell slightly over the previous two years, after making significant gains earlier in the decade.

The currency’s share rose from 0.7% at end-2012 to 1.1% at end-2014, according to a previous ad-hoc survey. Figures from SWIFT also point to a slowdown in internationalization, with the proportion of international currency payments denominated in RMB falling from 2.0% in March 2016 to 1.8% in March 2017.

That said, the share of external holdings of Chinese government bonds increased over this period, from 3.0% to 3.9%, according to the China Central Depository & Clearing Co.

The drive toward internationalization has been a key part of the authorities’ efforts to increase China’s economic clout over the last decade. There is still considerable long-term potential for RMB use as a reserve currency and a medium of international exchange given the global importance and inter-connectedness of China’s economy.

However, Fitch does not believe the authorities will pursue significant capital account liberalization if it poses risks to domestic financial stability. It therefore expects capital controls to be lifted in an asymmetric way over the next couple of years, with restrictions on inflows relaxed steadily and those on outflows mostly kept in place.

Developments over the previous two years support this view. Some reforms have continued the process of opening up China’s capital markets to foreign participation.

For example, since February 2016 foreign institutions have been allowed to enter the inter-bank bond market without prior approval. In time, this step should encourage the RMB’s use as a reserve currency, as most long-term fixed-income debt securities favored by central banks are traded in China’s inter-bank market.

However, the government tightened enforcement of capital outflows in 2016 to contain downward pressure on the RMB. Administrative hurdles for foreign-currency purchases by individuals have increased, as has the scrutiny of outbound foreign direct investment. The success of these measures in containing outflows suggests that many could remain in place for some time.

Meanwhile, investor concerns about medium-term financial stability are likely to continue to weigh on the attractiveness of the RMB as a store of wealth. Policy stimulus has stabilized the economy in the previous few quarters, but leverage and financial risks continue to build.