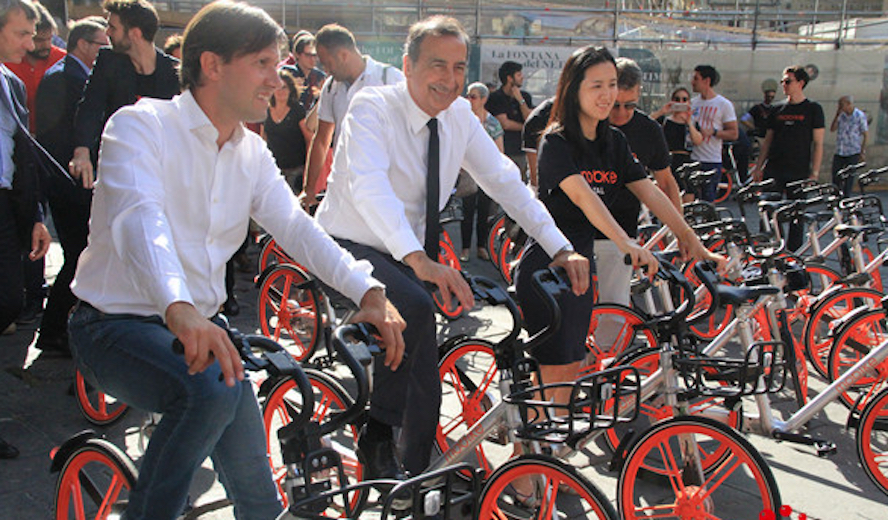 Despite being an export powerhouse, Chinese products have largely been run-of-the-mill stuff like cloth, shoes and toys. Change is on its way, however, and it’s coming on two wheels in the form of bike sharing.

With Mobike’s announced launch of bike sharing services in Florence and Milan, the Chinese bike sharing boom has now spread to Italy, the United Kingdom, Singapore and Japan. More European cities will soon be on board, likely followed by U.S. urban centers. Close behind is rival Ofo, which aims to be in 20 countries by the end of this year.

Bike sharing – a misnomer they are really bike rental services – is perhaps the first cool Chinese export since the time of Marco Polo. Just look at the mayor of Florence smile as he rides an orange Mobike earlier this week. For the first time in 300 years, Europeans are learning something new from the Chinese, in this case how to scan a QR code to unlock a smart bike lock. No wonder the Xinhua News Agency called bike sharing "China’s New Four Great Inventions", in reference to the four inventions that every Chinese citizen is taught to be proud of: the compass, gunpowder, paper-making, and printing.

Asia’s great exporting nations have each started with a single product that created national brand acceptance and led the way for additional product. For Japan, it was the Sony transistor radio in the 1960’s. For Korea, it was the Hyundai Excel compact car in the 1980’s. For China, will it be bike sharing?

Each launch in a brand new city gives China Inc. a simple, yet profound boost in terms of consumer recognition of Chinese products. Forget polluted cities and tainted food. With the spread of bike sharing, China could increasingly be seen as a creator of cool, environmentally sound products that actually make you healthier.

Even more significant is the technology that goes into the bike sharing business model, which will quickly open the door to a range of Chinese companies. These technologies include mobile phone apps to locate and pay for bikes via micro-payments, cloud computing to oversee bikes scattered across cities and big data in the massive amounts of marketable user information gathered from each rider. That explain why technology giants Tencent Holdings Limited and Alibaba Group are pouring hundreds of millions of dollars into market leaders Mobike and Ofo.

By downloading the app required to borrow these bikes you are giving the Chinese companies behind them valuable real estate on your mobile device. By renting a bike you are letting them follow your movements through town. They will know where you go, at what times and how often. They will know what shops you pass by. The mobile advertising opportunity are huge, especially for Tencent, as mobile advertising is one of the company’s largest revenue streams. Let’s say you regularly peddle pass a Starbucks coffee shop, but never stop. A coupon for free coffee at that specific location might turn you into a regular customer. And if you want something to pass the time while drinking that coffee, Tencent, the world’s largest purveyor of mobile content, will be happy to sell you a game.

Digital payment is another important, and lucrative back-end service associated with bike sharing. Alibaba, and its financial affiliate Ant Financial, have made it clear that their investment in Ofo isn’t just about bikes. Jingxian Dong, CEO of Ant Financial, stated: “Ant Financial hopes that through partnering with Ofo, we can open our mobile platform, credit system, payments, security capabilities, etc. as a model for the bike-sharing industry, and help the whole industry improve and develop in an orderly fashion.”

Combine that with Alibaba founder Jack Ma’s promise to “share the technology of Alipay with the whole world,” and it’s easy to see how getting people to download Ofo’s app, or Mobike’s app, will create a digital beachhead through which these companies can market additional financial services and spur the use of digital payment services globally.

Finally, there is a long-term benefit for Chinese companies in terms of interface and relationship building with local governments. It’s no coincidence that each international launch is announced in tandem with a civic government eager to look green, along with photos of the local mayor tooling about town on a Chinese bike. If you can convince a city government to allow untethered bikes on their crowded street and have them connected via the cloud, then it could be easier to launch additional businesses that require local regulatory or government approval.

If the governments of Manchester, Singapore or Milan decide they want to expand digital payment in their cities, implement a smart-city scheme, build out their cloud computing capabilities or beef up cyber security, Tencent, Alibaba, or one of their many affiliates will be right there to offer their services.

But the challenges faced by the Chinese bike sharing companies are also unprecedented. While Alibaba and Tencent have themselves smartly focused on emerging markets for their international expansion, Mobike and Ofo are targeting developed markets. Europe, Japan, and the U.S. have historically been tough markets for Chinese companies to tackle.

In addition, demand for bike riding services in these countries is much less than in their home market China. In Singapore, only 1.5% of commuters use bikes as a transportation choice. In the U.S., only around 11% of people have used bikes for transportation, while 65% uses public transportation systems. Not to mention overcoming complicated local regulations and unsuitable road conditions.

The outlook for Chinese bike sharing companies is uncertain, but for now, they can enjoy the spotlight and as a side effect, let Chinese exports shine in a different light.