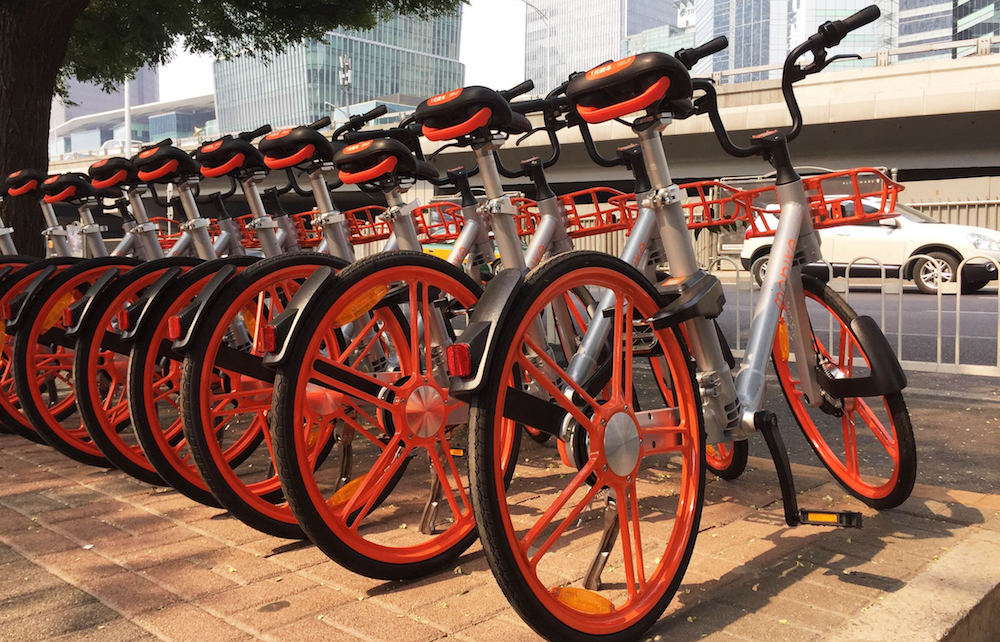 Whenever I see a small company having a startling large impact on the world, I look for an engine. I look for something that is amplifying what a relatively small number of people are doing. For example, the engine that rocketed Facebook (and Wechat) upwards was the economics and psychology of social media (plus viral marketing). The engine that powered Macau to become five times Las Vegas in a few years was the psychology of gambling plus 1.4B Chinese consumers. And so on.

So what is the engine that explains the meteoric rise of Mobike, Ofo and Chinese bike-sharing this past year? How is it these small companies went from start-ups to global operators so fast?

December 7, 2015: The First Day of Operations at Mobike

December 7, 2015 was the first day Mobike placed its bicycles on the streets of Shanghai. The then small team, led by co-founder Hu Weiwei, assembled their first bicycles in their office. The prepped the bikes, assembled the “smart locks”, installed them on the bikes and connected them to the solar panels. They then took these first completed bikes (about 50) to a few strategic locations around Shanghai, left them on the sidewalk and drove away.

Many on the team worried the bikes would just sort of disappear. Or maybe they would sit there on the sidewalk unused. Or maybe people would start damaging them or taking parts. But Weiwei was confident that it would be ok.

Over the next day, they tracked the bikes via GPS. And some staff drove by just to see if the bikes were still on there. And sure enough, the bikes didn’t disappear. And some had started to move around as people downloaded the app and tried using them for the first time. Dozens of users signed up based on those first 50 bike. The whole crazy idea of just leaving bikes on the street seemed somewhat validated.

And it was a crazy idea. Think about that act for a moment. Think about designing a new product, loading it on a truck, driving it downtown, and then just leaving it on the sidewalk and driving away. What business has ever before done that before? The bikes weren’t secured like park benches. They weren’t chained down like vending machines and post office boxes. And they weren’t pulled back into the store every night like tables at Starbucks. They were just left out on the sidewalk permanently, like they had been released into the wild.

And I think that is the right analogy for this. Mobike took an asset, gave it a certain amount of intelligence (by virtue of GPS and being part of a network) and then released it “into the wild” to survive on its own.

Take a look at the below video which shows the life of one of the first Mobikes over the course of a year. This bike was one of the first released in Shanghai. For those who can’t play this Youtube video, you can see it on Youku here.

Over the course of a year, the bike in this video was unlocked by 1,975 different users and made 2,021 trips (some users rode the same bike more than once). It clocked 4,850 kilometers. And it moved across virtually all of Shanghai, going from north to south, from far outside the city to downtown, and so on.

Don’t gloss over how strange all this is. Consumer products and services are normally sold in stores. Or they are sold online. Those are the two main retail spaces. Products and services don’t just exist outside on their own – and then sell themselves as they randomly move around the streets, sidewalks, parks, and so on.

I think this “assets in the wild” phenomenon is the economic engine behind the spectacular rise of Chinese bike-sharing. It is very unusual and the more you think about it the stranger it seems. These four articles are my deep dive into this.

Why are "assets in the wild" so powerful?

I think it is three factors:

These assets (bikes in this case) market, sell and / or deliver the services themselves, mostly independent of any staff, support or traditional retail or distribution system. Once released, they roam the city and sell on their own.

As they are mostly independent, these assets can be released in large numbers. They are not limited by retail space, shelf space, staffing or other factors. Since that first day, Mobike has released over 6.5M bikes out into cities.

These bikes were the first “wild assets” to occupy sidewalks, streets, parks and other public spaces. This is a space outside of traditional retail – and they got there first.

These three factors in combination are powerful. The huge numbers of these bikes in public spaces has made them an unavoidable. They are an overwhelming sales and marketing presence in the daily lives of urban dwellers. For those living in China, try to think of another product or service that has this type of overwhelming and unavoidable presence in your life.

A Definition for “Assets in the Wild”

My definition is that a “wild asset” must have three key attributes.

Attribute 1: The asset can exist mostly on its own in the wild.

You can just leave these bikes on the street because they do not need need staffing, support or to be returned to the shop, office or garage. They can exist mostly on their own.

You could also point to security assets that mostly independently monitor and will one day patrol facilities, roads and borders. You could point to new on-demand drones that can now be hired for spraying farms. Or drones that now routinely circle in China checking for pollution. These assets also mostly operate out in the wild and have a surprising degree of independence.

A discussion of "wild assets" also quickly bleeds into a discussion of "new retail". The new smart vending machines by companies like Citybox are pretty independent. The new check-out free convenience stores and kiosks by companies like Bingobox and Guoxiaomei are increasingly stand-alone on street corners. But the degree of independence of the asset is the critical question and is what makes “wild assets” a bit different than these last two examples.

We are looking for assets that are designed to exist and sell mostly on their own. This raises questions like:

Does it have inventory replenishment or other daily needs?
How much maintenance or power does it need?
How mobile is it? Is it directed or does it move independently?

Attribute 2: The asset can market, sell and / or deliver its product or service mostly on its own.

The real power of these mostly independent assets is that they are points of sale. They can sell independently and can often do so in spaces outside of stores and other traditional retail spaces. Like the smart bikes, they are designed to exist and to be able to sell mostly on their own. Thus, they can sell in spaces that have never been “retail spaces” before, such as in office hallways, in local neighborhoods, on subways, in parks, and even in the skies. In this, they are like upgraded versions of vending machines.

Finally, they can also be form of marketing, similar to outdoor signage. In any Chinese city today, you walk past thousands of brightly colored "on demand" bikes every day. And they are often located in spaces you cannot avoid, such as subway entrances, parking lots, and shopping mall entrances. So they can be a particularly powerful form of marketing. Outdoor media companies like JCDecaux must be looking at these bikes and scratching their heads.

Attribute 3: The asset can be released in large numbers.

If you have designed an asset that can exist mostly independently and do its primary sales function in the wild, there is nothing stopping you from releasing thousands or even millions of them. This is highly scalable approach – in a way offline retail is normally not.

That’s my definition. Note how Attributes 1, 2 and 3 really combine in a powerful way. Because these bikes can exist and sell mostly independently, you can just buy it on the street as you walk by. Or in the office hallway. Or in the park. You don’t have to go into a store. And as they can be released in large numbers, this can give them a ubiquitous presence.

Final point: Assets in the wild can be particularly powerful as a convenience offering.

I have argued bike-sharing is not really sharing, like ride-sharing in cars. Companies like Mobike have been effective (and disruptive) mostly because they are offering a new level of convenience, relative to owning a bicycle or using a docked bicycle rental. You can jump on a Mobike when you want. You can leave it where you want. And this dramatically increased convenience all follows from the ability of the asset to exist in the wild on its own.

There is no reason to think this phenomenon is just going to be limited to bicycles. They were just the first assets to be released into the wild. In another article, I will go more into how these wild assets market and sell themselves, how they grow sales on their own and how they do this without any marketing spend or support.

The author is Jeffrey Towson, Professor of Investment at Peking University Guanghua School of Management, as well as a best-selling author and a private equity investor.