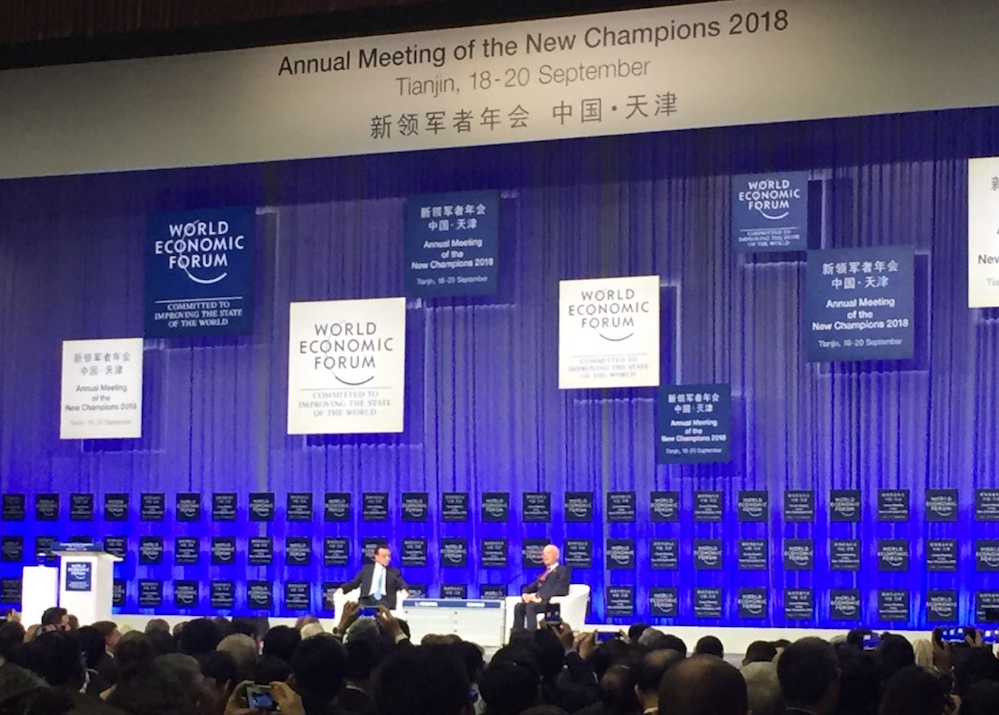 The ongoing global turmoil headlined by the China-U.S. trade dispute is a cause for concern, but there are also reasons for optimism, said business leaders and academics at the World Economic Forum on September 20 in northeastern Chinese city of Tianjin.

China’s large population and imperative to boost growth in rural areas, where living conditions are far worse than in its thriving cities, present an investment opportunity, said Wang.

This is unlikely to be easy, however, said Lutfey Siddiqi, visiting professor-in-practice at the London School of Economics and Political Science, comparing what China needs to do to having to switch engines in a bus moving at a fast clip à la Keanu Reeves in the film Speed.

One corollary of the current dispute is that the dependence of the global economy on China-U.S. trade dynamics will decrease, and China’s trade with the European Union and other partners will assume prominence, said Arun Sundararajan, Robert and Dale Atkins Rosen Professor of Business at the Stern School of Business, New York University. He added that China would be well poised to assume philosophical leadership of multilateralism in trade.

Other trading countries will find themselves caught in a pincer between the U.S. and China, but this could provide a catalyst to the ASEAN countries to hasten their integration, so as to benefit from improving the composition and balance of their trade with China, Siddiqi said.

China is also opening up more and more sectors to foreign investment — securities and insurance, for instance — and would do well to improve its social security system at this time, which would mobilize its massive savings by giving people the courage to spend rather than save, said Jing Ulrich, managing director and vice-chairman for Asia-Pacific at JPMorgan Chase & Co.

However, she said, there would be reason for Asia and indeed the world to worry if the current dispute becomes protracted, creating a lose-lose situation for all concerned.

"China will not change its industrial policy due to external pressure," said Ulrich, adding that China has a long-term plan to modernize and transform from an export-dependent to a consumption-driven economy, and to rapidly advance in the technological sphere, from which it will not deviate.

"Negotiations will begin, but it will be a rough and bumpy road," she added. "The problem is in technology, where China and the US both want to lead in e-commerce, e-payments, artificial intelligence." But there might be some resolution in the coming months if the US tempers its stance after its midterm elections, said Ulrich.

Nevertheless, the upcoming technologies of the Fourth Industrial Revolution are a cause for optimism for the global economy, said Sundararajan, and those who are cautious about investing in these technologies now will miss out in the long run.

At the same time, Asian countries, as countries everywhere, must work to reduce technological inequalities and make their countries more inclusive. Various Asian countries have very different demographic realities, which will influence the speed at which they develop technologies.

China, for instance, is ahead of the U.S. in deploying mobile phones for a range of day-to-day activities. However, it will go slower than Japan in automation, because it has a vast labour force to think about, Sundararajan said.