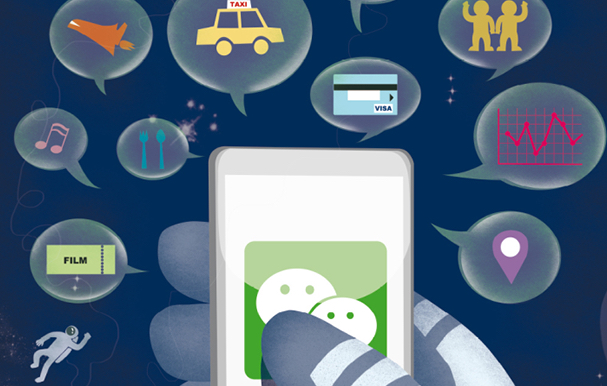 When Airbnb first entered China, it had no name — it literally did not even have a Chinese name. It had to grow from establishing presence to driving revenue. Through WeChat, they managed to gain more than 130k+ followers on WeChat and 2 million+ guest arrivals from China at Airbnb listings worldwide.

Airbnb is not alone. Many American companies looking at the Chinese market have been creative in using WeChat — often times even before they establish a local office. In fact, businesses have used WeChat to 1) spread awareness, 2) enhance engagement, 3) drive revenue and 4) provide value-added services for the vast market in China.

Airbnb first launched its WeChat public account in September 2014, just one day before the Mid-Autumn Festival. This also happens to be the second busiest traveling season for Chinese tourists (given that it’s a 3-day holiday followed by Golden Week’s 7-day holiday in October). As a result, Airbnb’s optimal launch time allowed it to fully capture the two busiest times of travel in China.

Airbnb began with a timed release of its "free nights" promotion specific to the theme of the festival. It began with an article describing its themed residences abroad, which are unique places that would usually cost thousands of dollars per night but free for lucky travelers who are selected. In order to participate in draws for free stays, travelers simply had to share that article on their "moments" and get a certain number of likes.

This strong social element of the campaign helped it go viral. In fact, it was so successful that Airbnb continued to do its “free nights” promotions for major holidays in the years to come, tailoring campaigns to different festivals and cultural phenomenon.

For example, this past Halloween, a holiday that the Chinese are beginning to celebrate for fun, Airbnb invited guests to a castle where no one has stayed overnight since 1948. As a result, the campaign inspired travelers to consider new destinations and book stays through Airbnb. 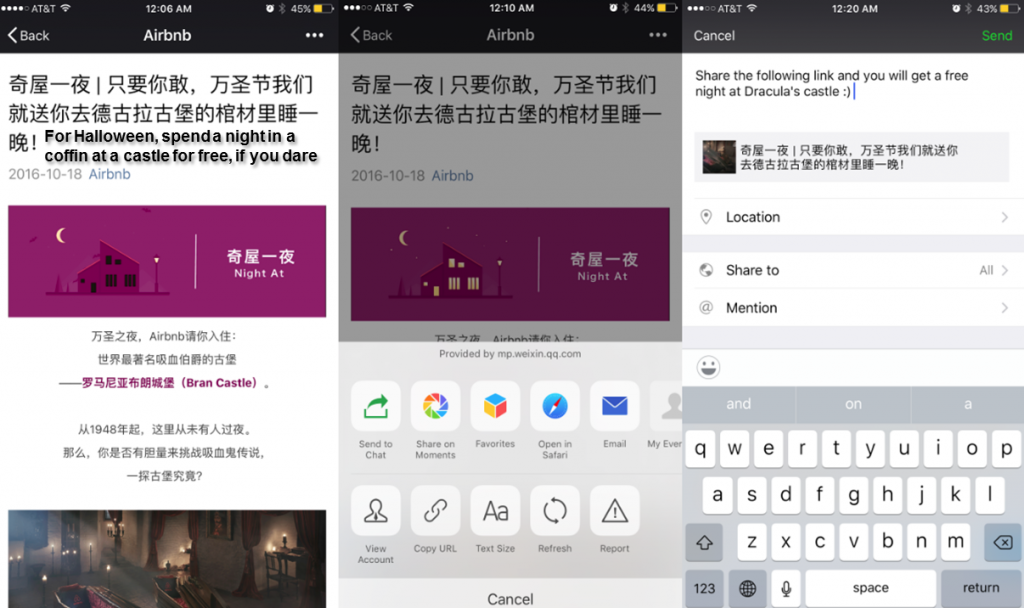 Overall, WeChat presented an effective platform for Airbnb to spread brand awareness in China, with the number of its followers growing to 130k+ on WeChat and its readers reaching 20k+ per article.

Starbucks is another example of a successful WeChat campaign for spreading awareness. Starbucks first launched its WeChat public account during the summer of 2012 and ran a month-long campaign to promote its brand and its summer drinks.

Consumers could scan the QR code printed on the cups for a chance to become a VIP member and receive additional discounts. The QR code directed consumers to follow Starbucks’ WeChat public account in order stay up-to-date on the latest promotions.

Starbucks then asked its followers to share their mood using emoji. In response to the chosen emoji, Starbucks replied with a personalized album of songs, which people could listen to before, during or after getting coffee. As a result, Starbucks became a part of a certain lifestyle.

Many people loved this feature and resonated with the music, so they shared it with all of their friends in “moments”, generating further momentum. By the end of the month-long campaign, Starbucks attracted an additional 128k fans with an average of 238k emoji received per day and US$1.1mm in sales for its summer drinks (source in Chinese).

In certain locations, consumers can also follow the public account in exchange for free Wi-Fi, bringing in new followers via mobile.

In addition to a public account, Airbnb also offered live sharing sessions over WeChat on occasions. For instance, hosts and travelers were invited to share their experiences as well as travel hacks via audio in WeChat groups of up to 500 listeners. These can be organized officially by Airbnb or by passionate individuals.

While Airbnb is a successful case study, it also provides experiences that require relatively little customer commitment. Tesla, on the other hand, requires high commitment. As a result, it needs to truly engage customers on a deeper level. WeChat allows Tesla to do just that.

In order to engage consumers, Tesla leveraged WeChat public account’s customized menu options for an integrated experience. Individuals can click through options to learn all about Tesla, including specifications of existing models as well as highlights of upcoming models. It has a chatbot-like feature where people can text specific keywords to the official account for automated responses.

In fact, to engage consumers on a deeper level, Tesla allows individuals to book test drives through its WeChat public account. People can either click on the “test drive” menu option or text “test drive” to the public account, and they will be directed to submit a few pieces of basic personal information. Soon after, local representatives in the same city will reach out over WeChat to provide personalized services. 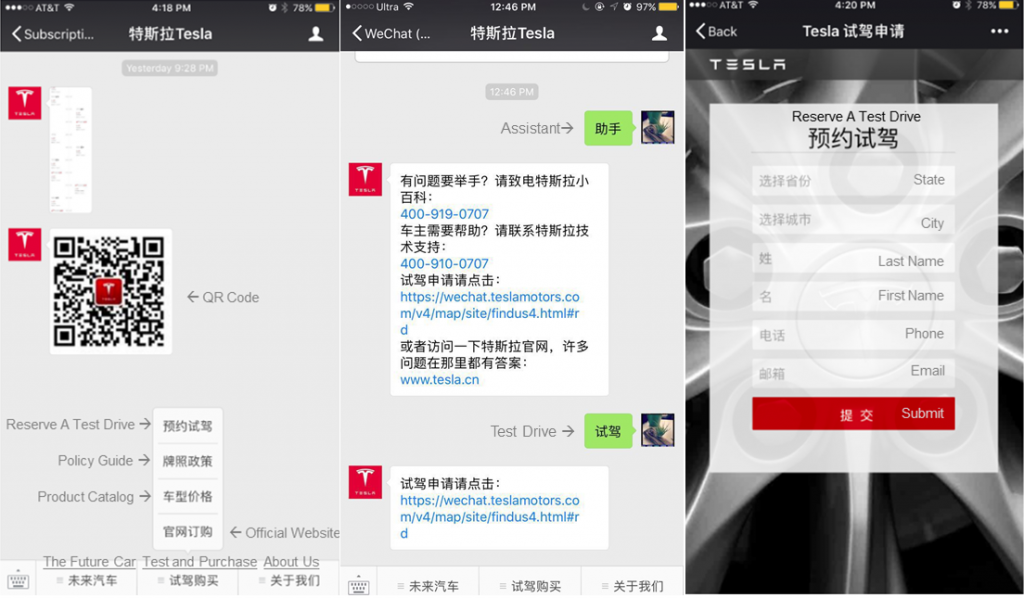 As a result, this entire experience is integrated seamlessly so that people can book a test drive the same way they would talk with a friend.

In order to monetize its followers, Airbnb designed a simple process to convert its WeChat traffic directly into revenue.

On Airbnb’s WeChat official account, travelers can browse interesting articles sorted by destinations. At the bottom of the article, there is an option to browse available housing at the location described in the article. Upon clicking that option, users can then navigate Airbnb’s platform within WeChat, which lowers barriers for users who do not want to leave WeChat.

Within WeChat, users can search and filter for housing options as well as view all images. It is only upon finalizing on a housing of choice that travelers will be directed to Airbnb’s own app for payment purposes. In fact, users can link their accounts so that they can use WeChat to authorize a log in into Airbnb,directing traffic seamlessly from WeChat to Airbnb for payment.

Beyond tech companies, even traditional hotels including LINQ Hotel and Casino have used WeChat to drive revenue. Similar to Airbnb, LINQ also allows users to directly book rooms via WeChat. However, LINQ has integrated WeChat more deeply into its customer experience.

Upon arriving in the lobby, guests are greeted by a WeChat concierge robot, which uses AI and deep learning based speech technology that allows visitors to converse with him directly through WeChat. By scanning the QR code on the robot’s screen, guests can follow the hotel’s public account and send messages to the robot, which will speak back in real time and can even perform a dance.

Once checked in, guests can use WeChat to open the hotel door. Inside the hotel room, visitors can then control their hotel rooms via WeChat. This allows them to pull up controls for changing lighting, monitoring thermostats, adjusting curtains and locking doors, among other features. These additional WeChat features delighted customers, resulting in viral shares in “moments” and new visits booked by inspired travelers.

In certain scenarios, users can also make additional purchases by scanning the specific QR code and paying via WeChat pay. This feature allows the hotel to avoid the complexity of a POS system and customers to avoid barriers to purchase, thereby driving additional revenue.
IV. Providing Value-Added Services

Speaking of value-added services, it is impossible to move on without talking about what Durex (a leading condom brand) has done on WeChat. In addition to provide information about its products, Durex has also provided a safe and private platform for people to talk about sex, a topic that many Chinese still consider taboo. In fact, Durex’s chatbot has enabled people to have private conversations freely.

For example, if you text “position” to Durex, it will respond with an article about a sex position. The chatbot also cheekily notes that texting the same keyword will receive different responses each time. You can also text other keywords mentioned in its menu options to learn more about others experiences in dealing with sex and relationships, whether it be to learn more or to get inspired.

On a more serious note, Durex also provides the sex education that is often missing in China. Users can text keywords or navigate its menu options to find Durex’s version of “Wikipedia” and “Urban Dictionary” to learn more about sex. It even has its own “BuzzFeed” for interesting news as well as its own “Rotten Tomatoes” for sexual content to help guide consumers.

It has its own database where people can see the latest statistics around topics relating to sex and sexual products. This includes when and how people communicate about sexual relationships as well as the average Chinese consumers’ perception of different products, all of which can be found through its chatbot or its menu options.

Moreover, beyond its chatbot and navigation menu, Durex also has realrelationship and sex experts available on WeChat to answer questions from its followers. People can submit their questions anonymously and sort the type of question by a hash tag. At the end of each week, Durex shares a collection of some of its best Q&A with all of its followers on WeChat.

As a result, Durex has been able to go beyond engaging its customers via its fun content (including personality surveys “which flavor are you?” as well as popular games and videos) to truly providing additional value.

In fact, Durex has also become a part of daily conversation through its custom-made emoji. The face used in its emojis is a widely recognized icon from a Chinese comic, representing a generally creepy face, and it has been popularly used as a joke in casual conversations.

From these campaigns, Durex has grown rapidly in China, with the number of its followers growing to 670k+ on WeChat and its readers reaching 100k+ per article.

In addition to 800 million users, WeChat also has 10 million brands and businesses on its platform. For startups that may not yet be ready to physically enter China, WeChat is a great platform for testing the market and gaining deeper insights into the profile of Chinese consumers.

Thus, it can be expected that WeChat’s ecosystem will continue to lower the barriers for great businesses to understand, enter and excel in the Chinese market in the future.

(The authors are Shuonan Chen and Sheffield Wang from Agile VC, a venture firm based in the San Francisco Bay Area. The original article is published here.)