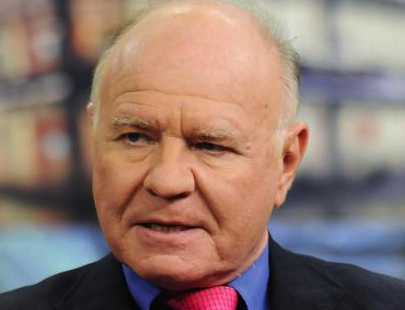 In this episode of China Money Podcast, our guest is Marc Faber, publisher of the Gloom Boom & Doom Report newsletter and director of Marc Faber Ltd, an investment advisor and fund manager.

Faber talks with our host, Nina Xiang, about China’s credit situation, why he’s bullish on individual mining company stocks and the reason behind his aversion to investing in private equity or hedge funds.

Trade data from other Asian economies suggest that Chinese exports were much lower. China’s growth has been slower and of relatively lower quality. I think it’s going to decelerate further. There will be some speed bumps ahead that could be quite painful.

Q: The Energy Information Administration said that China would surpass the U.S. to become the world’s biggest net oil importer this October. What are the implications for the oil industry?

A: We have declining oil demand in the developed economies in the West and in Japan. There is flat demand in economies such as South Korea and Taiwan. Oil consumption in the Middle East, India, China and other emerging economies are rapidly growing.

China has four times more people than the U.S., and it’s natural that it will become a bigger net oil importer. This means that oil prices are unlikely to collapse. Some analysts say that oil price will collapse to US$40 or US$50 a barrel. I don’t think it’s going to happen because the underlying demand is relatively strong.

The other implication is that China and other Asian countries are heavily dependent on oil from the Middle East. Securing that supply is obviously a top priority for China. That could lead to geopolitical tensions in Asia between China on the one hand, and Japan, the Philippines, Taiwan and Vietnam, countries supported by the U.S. on the other hand. The tension could increase in due course and have an impact on asset prices.

Q: Does it excite you that Tesla Motors is reporting better than expected revenue and profits?

A: Usage of oil in cars may decline somewhat at some point. But there are many hurdles for electric cars for the foreseeable future. I can’t really see how people in Northern Thailand here can use battery-driven cars. It may happen one day, but will take a long time.

Even if electric cars are introduced more broadly, it is such a small percentage of energy consumption that it won’t have an impact. Also, we have to determine how much energy is required to produce those batteries.

Q: You’ve said that there had been a huge credit bubble in China, and it’s not going to end well. How do you envision that ugly end?

A: We have excessive debt everywhere in the world. The problem is that even if the Chinese government can gradually write off, cover up those bad loans, or put them into a government-sponsored fund, the kind of credit-led growth will be much slower going forward.

Credit growth over the last three or four years in China has been faster than other economies prior to their financial problem or crisis. There could be a financial crisis but the government might be able to postpone it. But postponing the problem does not mean solving the problem.

Q: Would you say that the kind of money printing we see right now is greater than anything you’ve seen in the past?

A: In the past, there were some countries that increased their money supply at a faster pace than the present time, such as Latin American countries in the 1980s, Germany between 1919 and 1923, both had hyperinflation; in Eastern European countries after the fall of the Berlin Wall in 1989.

However, I’ve never seen money creation in such concerted efforts. Every central bank in the world has been increasing its balance sheet. That is unique.

Q: How are you positioning your investments now in this environment?

But with my view of the world, the Chinese slowdown, no growth in Europe, hardly any growth in the U.S., and some symptoms of credit tightening in the global economy, I don’t think there is a hurry to buy anything.

Q: Do you see good investment opportunities in commodities?

A: One sector that individual investors can buy are gold and silver miners such as Newmont Mining Corporation, Freeport-McMoRan Copper & Gold, or Barrick Gold Corporation. These shares have fallen by more than 50% whereas the U.S. stock market was up significantly. I’m not suggesting that mining stocks will make new all-time highs. They would have to go up 100% to do that. But can they go up by 20%? I think yes.

Q: Have you looked into private equity or hedge fund investments in Asia or China?

A: The performance of hedge funds has been horrible compared to indexes or long-only managers. I’m not particularly interested in hedge funds with very few exceptions. The fee structures make it practically impossible for investors to do well.

Private equity I’m not particularly interested in either, because their performance has been weak too. They are very dependent on a strong stock market. I’d rather invest in the stock market.

Marc Faber is the publisher of the Gloom Boom & Doom Report newsletter and the director of Marc Faber Ltd, an investment advisor and fund manager. Between 1970 and 1978, Faber worked for White Weld & Company Ltd. in New York, Zurich and Hong Kong. Then he was managing director of Drexel Burnham Lambert in Hong Kong before setting up his own firm in 1990.