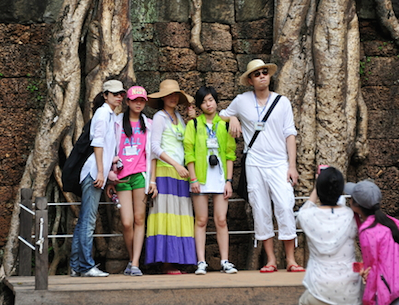 When asked about 2017 travel, 70% of Chinese respondents say they will travel abroad two times or more, an increase by almost 10% compared to the same period last year.

"Despite the upheavals of 2016, we see a clearly increased level of travel interest from Asian tourists," says Vivian Hong, president of Travelzoo Asia Pacific. "Thanks to Asia’s ascendancy in the global economy, consumer confidence in Asia remains strong and it’s reflected in the travel industry."

This is especially true for China. China’s millennial generation is becoming the dominant force behind the travel wave. Mostly married and raising children, they are willing to spend more of their disposable income on a sunny beach holiday with their family.

In the past 12 months, there has been an increase of 10% in Chinese tourists taking two or more holidays. The number of Chinese tourists who are willing to spend more than RMB14,000 (US$2,039) on traveling has also increased nearly 10% compared to last year.

The number of respondents willing to spend more than RMB600 (US$87) per night on a hotel this year rose 11% roughly. The number of Chinese tourists who prefer budget hotels has decreased nearly 5%, while the number of those who prefer high-end global hotel groups almost tripled.

Nearly 30% of respondents in Hong Kong plan to travel four times or more in 2017, which is an increase of 5% over the same period last year.

Destinations within the Asia Pacific region are notably more attractive to Asian tourists. Japan continues to top all other destinations. It is the country Asian travelers most want to visit based on a unanimous vote from mainland China, Hong Kong, Taiwan and Singapore.

Australia is also on Asian travelers’ minds, being one of the top 10 destinations in every Asian country and region, and being the second favorite destination for Chinese and Singaporean travelers.

For Chinese travelers, Japan and Australia are the No. 1 and No. 2 destinations they would like to explore in-depth. More than 22% of Chinese respondents who plan to visit Japan are repeat visitors.

"Asian travelers are becoming much more sophisticated," adds Vivian Hong, "they used to travel primarily for fast-paced sightseeing and luxury shopping. In the past few years, we saw a rapidly growing number of Asian tourists who prefer a more personal and in-depth travel experience. They value natural explorations and cultural experiences the most when they travel in-depth, for which Australia and Japan are perfect destinations."

For the first time, none of the Western European destinations was voted for the top five destinations by all Asian countries and regions. Nearly 65% of Chinese respondents chose "safer" as one of their reasons behind voting for Australia, while 50% chose the same reason as part of why they voted for Japan.